Apparently they had taken to emulating her, and had actually lip synced our conversation.

A Request for Clarification

Hey, sorry to make you read so much dialogue on a Friday. 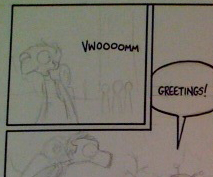 Why do I always like the pencil sketches of comics more than the final, inked version?  Does anybody else think it just looks neater?  I guess I think it has more “character” or something.  Click on the thumbnail to see the sketch before inking and shading everything.

By the way, I drew antennae on these aliens because I think it makes them look smarter.  I think antennae are like the alien version of glasses or a British accent.  At first I wanted to draw the aliens with glasses, but then I thought that if they’re intelligent enough to travel the galaxies by teleportation, they’re probably intelligent enough to have developed flawless eyesight-correction procedures.